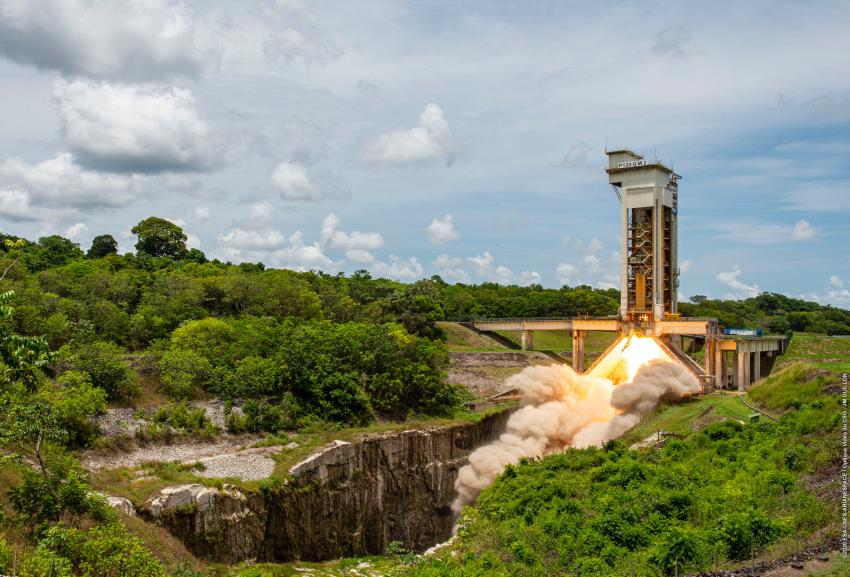 The P120C was successfully tested for the third time on October 7, at Europe’s Spaceport solid rocket motor test bench operated by the French Space Agency (CNES). This third successful test, carried out in the Ariane 6 configuration, paves the way for final qualification by the European Space Agency (ESA). The first and second tests on July 16, 2018, and January 28, 2019 were also successful.

The P120C will equip both configurations of Ariane 6: Ariane 62 will be equipped with two boosters* and Ariane 64 will have four. For all the teams involved, these successful firings are also a source of great pride, because all the steps in the development process took place nominally.

The P120C motor is co-developed by ArianeGroup and Avio, through their 50/50 joint venture Europropulsion. The P120C program is managed and funded by the European Space Agency. The P120C symbolizes the fruitful collaboration between Avio and ArianeGroup in the launch vehicle field – an example of the strength of “Space Team Europe” comprising industry, national space agencies, and the European Space Agency.

Considering the major investments required for producing solid-propellant motors, the P120C is a perfect example of industrial optimization, as it will equip both of the Ariane 6 configurations as well as the first stage of Vega-C. This will make optimal use of industrial facilities across the European continent and French Guiana, thus meeting the goals of the Ariane 6 and Vega-C programs: optimized costs, shorter operation cycles owing to a simplified design, and the application of innovative technologies and processes.

The P120C has a maximum thrust of 4,500 kN and a combustion time of 130 seconds. It consists of two principal parts. The first is the structural casing, built by Avio and made of carbon fiber (filament-wound, automated fabric layup pre-impregnated epoxy sheets). The second part is the nozzle, built by ArianeGroup, made of various composite materials including carbon/carbon, which allows very high-speed ejection of the extremely hot gases (3,000°C) generated by the motor, transforming this combustion gas energy into kinetic energy to create thrust. The nozzle can also be pivoted which enables the launch vehicle to be steered. Propellant manufacturing, loading, and final integration of the motor take place in French Guiana.