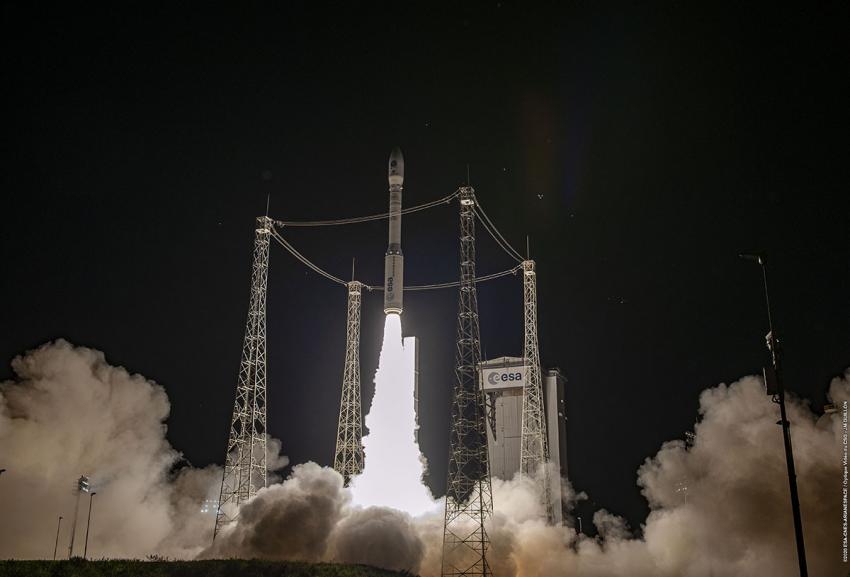 Kourou (French Guiana), 3rd September 2020 – Today’s mission from Kourou’s spaceport in French Guiana marked a success for Vega’s return to flight. The European launcher, designed, developed and built by Avio, has perfectly placed in orbit 7 microsatellites weighing from 15 kg to 150 kg, along with 46 smaller CubeSats in a single rideshare thanks to the innovative SSMS (Small Spacecraft Mission Service) payload adapter. The spacecraft are to serve various applications, including Earth observation, telecommunications, science, technology and education.

The SSMS is a modular carbon fiber dispenser designed by Avio to meet the low Earth orbit (300 km and more from Earth) launch service demands for clusters of small satellites weighing anywhere between 1 kg (Cubesat or Cubesat clusters) and 400 kg (Minisat). Design authority for the multi-payload dispenser system is SAB Aerospace, an independent Italian SME (small/medium enterprise). The SSMS program, initiated by the European Space Agency (ESA) with the European Commission’s contribution, will boost the ability to offer ride-share solutions tailored for the flourishing small satellite market.

“After the postponement of March due to the COVID-19 pandemic and that of June caused by adverse weather conditions, the success of Vega's return to flight is the result of the hard work of all Avio staff who continue to demonstrate great professionalism, competence and resilience” commented Giulio Ranzo, CEO of Avio. “The excellent performance of the SSMS dispenser, which allowed – first time for Europe - to place 53 satellites into orbit in a single rideshare, increases Vega’s ability to better meet the rising expectations of our customers in terms of cost savings and new technologies in a growing market”.

“Thanks to the resumption of operational activities at the space base, we now look forward to the next Vega flight scheduled for November” - concluded Ranzo.