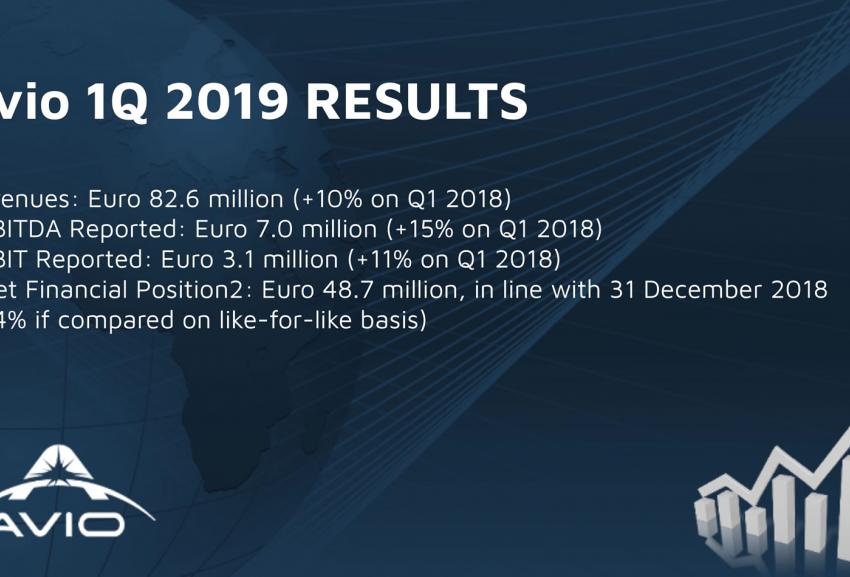 The Board of Directors of Avio S.p.A. today reviewed and approved the Q1 2019 results.

Avio, a leading aerospace enterprise listed on the STAR segment of the Italian Stock Exchange, reports revenues of Euro 82.6 million for the first quarter of 2019 – up 10% on the same period of the previous year. The revenue improvement is mainly driven by Vega increased development activities.

Reported EBITDA of Euro 7.0 million grew 15% on Q1 2018, benefitting from a lower impact of fixed costs on greater volumes of activity, and from a low level of non-recurring costs (Euro 0.1 million, in line with Q1 2018).

Reported EBIT of Euro 3.1 million was up 11% on the corresponding period of previous year.

The Net Cash Position is unchanged versus 31 December 2018 at Euro 48.7 million. The value is however affected by the negative impact derived from the application of IFRS16 worth Euro -6.4 million. By using the pro-forma value as of 31 December 2018 of Euro 42.7 million, the Net Financial Position as of 31 March 2019 would result improved by Euro 6.0 million, as a result of the ordinary operating cash dynamics.

In the first quarter, one Vega (VV14) and one Ariane 5 (VA247) launches took place. In parallel, the Critical Design Review of the new Vega C launcher has been completed successfully. Vega C has therefore entered its Qualification Flight phase (Maiden Flight expected by the beginning of 2020). During the first few months of 2019, we also highlight the successful completion of the second P120 (first stage of Ariane 6 and Vega C) static firing test (in Kourou in January) and of the second Zefiro 40 static firing test motor (Vega C second stage) in Sardinia. The new propulsive stages of the new generation launchers are therefore now qualified for flight. Finally, the assembly of the innovative “Small Spacecraft Mission Service” (SSMS), the multi-payload adapter designed by Avio has been completed. SSMS will fly on Vega in September 2019, carrying more than 40 satellites.

“The positive results of 2019 Q1 confirms, once again, the growth trend of Avio of the last years – stated Giulio Ranzo, Chief Executive Officer of Avio. 2019 is a fundamental year for the growth of our Company. We will perform 4 Vega and 5 Ariane 5 flights and we will start the integration activities for the Vega C Maiden Flight in early 2020, the new version of Vega with increased performance and a total capacity of 2,350 Kg”.

“The good start of 2019 and the advancement in the development of new technologies and applications as well as the steady growth of the small satellite global market, allow us to strengthen our confidence in the future growth”.