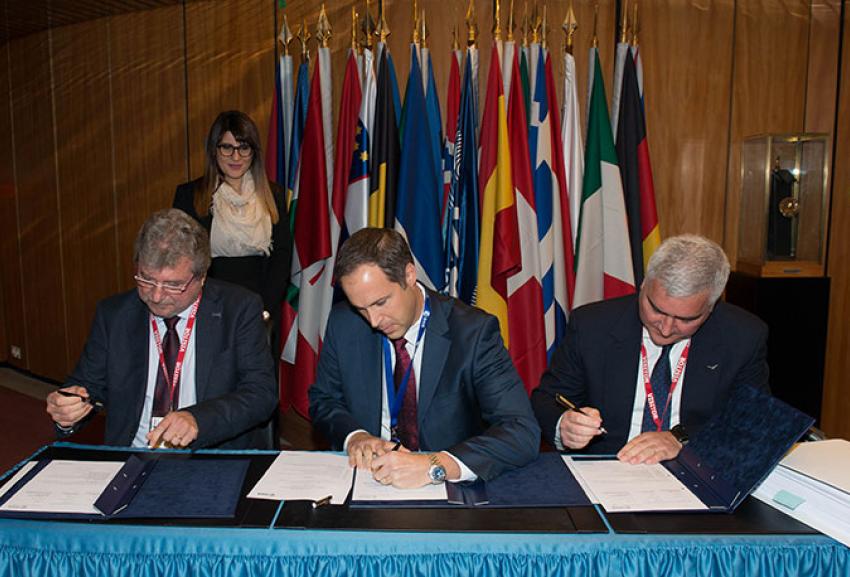 THE NEW LAUNCHER HAS A LIQUID OXYGEN/METHANE ENGINE WITH A LOW IMPACT ON THE ENVIRONMENT. THE SPACE RIDER CAN RETURN TO EARTH AT THE END OF ITS MISSION AND BE REUSED.

Colleferro 30th November 2017 – Today, Avio signed two contracts with ESA, the European Space Agency, in Paris to develop the Vega E launcher and the Space Rider re-entry vehicle, in line with market expectations. The contracts are worth a total of €89.7 million.

The first contract is to develop the Vega E launcher (Vega Evolution), a European project where Avio is the leader of around ten companies. The contract for this activity is worth €53 million.

Vega E is the medium-term evolution of the Vega launcher and, as such, features a high content of technological innovation and more compact three-stage architecture. The upper stage has a revolutionary liquid oxygen/methane engine, technology that gives it a very low impact on the environment and the capacity for multiple re-ignition, a feature giving the launcher more flexibility during orbital manoeuvres.

Space Rider is a re-entry vehicle, the evolution of the IXV (Intermediate Experimental Vehicle, launched by Vega in February 2015), capable of ‘navigating’ up to 2 months in low Earth orbit before returning to earth. Re-entry enables the recovery of all the useful load that can be analysed, and the vehicle to be reused for a new mission. The contract signed by ESA with Avio and TAS-I (Thales Alenia Space Italia) is worth a total of €36.7 million for the development of the Space Rider system, consisting of two modules: AOM (Avum Orbital Module) and RM (Re-entry Module). Avio will handle the development of AOM, a specific version of AVUM (fourth stage of the VEGA C) capable of supplying power and services for controlling the vehicle’s re-entry attitude during the orbital stage.

The CEO of Avio, Giulio Ranzo, added: “signing these important contracts, in this fundamental year for our growth, culminating with the listing on the stock exchange, strengthens the position of Avio as a benchmark player in the market of space launchers. The recent successes of Ariane 5 and Vega, which set the record of 11 consecutive successful flights a few weeks ago, the contract to develop the Vega C, now at an advanced stage with the tests of the P120 and Zefiro 40 engines, also confirm the expertise and reliability of our company and its main European partners in the global space market”.