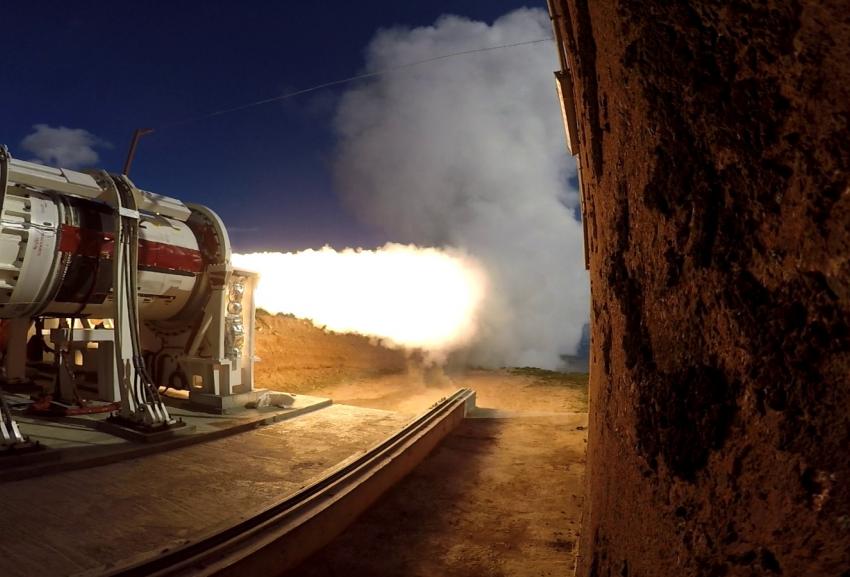 The test was performed at the presence of the Undersecretary of Defense Hon. Giulio Calvisi who then visited the construction site of the new SPTF industrial site for space activities in Perdasdefogu, Sardinia

Cagliari, 1st October 2020. The qualification test of the Zefiro 9 VT3 engine, an advanced version of the third stage propulsion system already in use on the Vega launcher and specifically enhanced and customized for the new Vega C, was successfully completed this morning in view of the maiden flight scheduled for 2021.

Thanks to this test, which took 4 weeks of preparation and involved 20 technicians and specialized operators, it was possible to record more than 500 measurements in the 120 seconds of engine ignition, collecting all the necessary data and parameters to calculate the behavior of the engine with an approximation very close to the real conditions in which it will operate in space. Only few countries in the world have the complete and autonomous capacity to develop and qualify space engines and, for this reason, Sardinia plays an increasingly central role in the Italian and European aerospace sector.

The test was followed by a visit to the Avio SPTF (Space Propulsion Test Facility) building site in Perdasdefogu (Cagliari), a project carried out with funding from Avio, The Ministry of Economic Development and the Sardinian Region, for the progress of the construction of the LRE test bench, intended for the development and qualification of "green" engines powered by cryogenic propellants, the sustainable future of space propulsion. The meeting was attended by the the Undersecretary of Defense Giulio Calvisi.

As foreseen in the program presented in January, the end of the works is confirmed within the end of the year, to allow the installation of the test plant and the execution of the first engine firing test. In parallel, engineering activities continue at the AVIO headquarters in Sardinia, Villaputzu (Cagliari). Giorgio Saccoccia, President of the Italian Space Agency stated "The Italian Space Agency is very satisfied with the results of the test, which demonstrates that public funding for national and ESA programmes in the access to space sector allows the strengthening of national competences both in the well-established solid propellant propulsion and in the innovative liquid propellant (oxygen-methane). These activities are the key building blocks of the identified path to strengthen national capacity for access to space. I would also like to underline that today's test represents an important step in the implementation of the technological development roadmap (which includes activities at national and ESA level through the LEAP programme) identified by ASI in the framework of the national strategy for Space defined by the Italian Government. In fact, the fire test on today's static bench test of the Zefiro 9 engine of the Vega satellite launch system allowed to demonstrate the correct behavior under operating conditions of the new technologies and materials developed in Italy, thanks to the collaboration that has been realized, under the direction of ASI, between the industry, the research centers and academia.

Sardinia, thanks to SPTF, becomes one of the most important space technology poles in Europe - commented Giulio Ranzo, CEO of Avio. With the contribution of Asi, this investment on one hand will expand the skills and technological capabilities of the Italian Industry and Universities in space by increasing their competitiveness; on the other hand, it will allow Sardinia to become a strategic crossroads for the future of the sector, also thanks to the qualification tests of the motors of the third stage of the Vega E, which represents the new frontier of European space launchers".